Home Articles Gridlock In Washington: Is it Real and Good for Business? 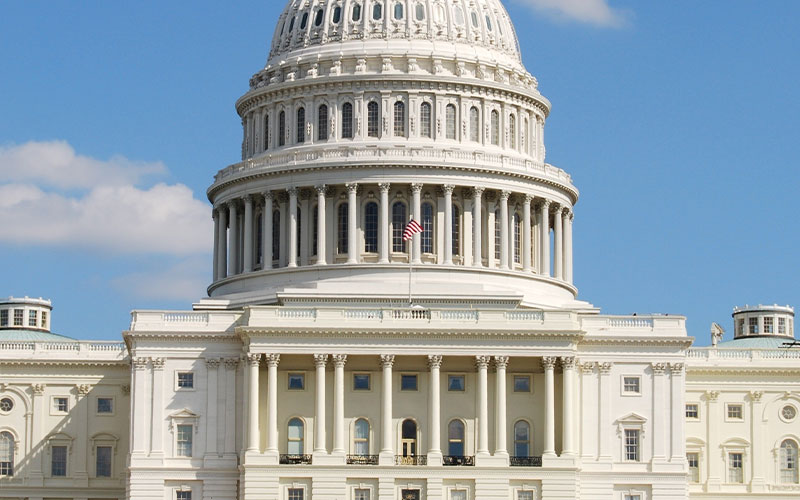 In August 1986, President Ronald Reagan said, “The nine most terrifying words in the English language are, ‘I’m from the government, and I’m here to help.’” There is no question government plays a role in the daily lives of every American and in each transaction for every business. The federal government is your not-so-silent partner, and who is in charge of Washington means the difference between opportunity and obstacles.

The 2020 election results delivered to the country a divided Washington, with a Democrat in the White House, a Republican-controlled Senate and a Democratic Speaker of the House – the first such combination in over a century. What does this mix of Biden-McConnell-Pelosi mean for American mold, tooling and die makers in 2021 and beyond? And is gridlock real and, in fact, good?

The soaring hopes many Democrats had for advancing an expansion of health care, infrastructure legislation, the Green New Deal and a massive stimulus bill with tax increases quickly fell to reality after the November 3 election. A divided Washington does not mean complete inaction on major Democratic priorities, but a Republican-controlled Senate creates a significant obstacle to their agenda – or a balance, depending on your perspective.

Despite prospects of legislative stalemate in 2021, manufacturers across the country still report a need for additional support during the COVID-19 recovery. A September survey of AMBA members showed that 79% of association members accepted a Small Business Administration Paycheck Protection Program (PPP) loan – an example of the government actually being “here to help.”

A divided Washington is different than one gripped by gridlock and, if history is doomed to repeat itself, we likely will see more activist state and local governments as Washington struggles to move major legislation in 2021. However, this legislative gridlock is what drove up the stock market in the days when President-elect Biden’s victory became apparent and the congressional results remained clear.

Wall Street, high-wealth individuals and the healthcare and technology industries all see this scenario as good for business, with the prospects of increased corporate tax rates unlikely due to the Senate being under Republican control. A system of checks and balances devised centuries earlier could defend them and other targets placed in the crosshairs by Biden and Harris on the campaign trail.

But, during a pandemic, is gridlock really what the American people and businesses need? The election outcome all but guarantees President-elect Biden will not secure the major economic stimulus bill he had hoped to pass through a Democratic-led Congress by March. Early rumors among overly optimistic Democrats ahead of the election predicted an economic stimulus measure upwards of $3 trillion.

Many of us who lobbied the Obama administration in its earliest days recall then-Vice President Biden serving as the lead negotiator and implementor of the 2009 economic stimulus bill. He oversaw much of the dispersal of funds, and those close to the President-elect indicate he was eager to build on those experiences and inject the economy with significant government aid had Democrats also won the Senate.

Not only do few in Washington envision such a large stimulus measure moving in 2021, hope quickly is fading for an infrastructure bill long sought by the likes of Caterpillar, its supply base and countless equipment leasing companies slated to benefit from construction projects in congressional districts across the country. I agree that a massive stimulus measure envisioned by Biden’s economic team is unlikely, but not all legislation and regulation will grind to a halt.

Lawmakers in both parties remain committed to overhauling the nation’s higher education and apprenticeship laws – Congress last updated the National Apprenticeship Act in 1937. We expect some action on workforce training legislation (supported by the AMBA), an increased focus on domestic sourcing and federal government purchases of US-made goods, and continued pressure on China – all issues on which the association is lobbying in Washington.

While the media and Twitter pundits will focus on Capitol Hill, those of us lobbying for manufacturing in America are preparing for an onslaught of regulatory and executive branch actions by the incoming administration.

Trade and tariffs have long been under the primary purview of the president, which will remain the case in a Biden administration. However, sources close to it expect trade to take a backseat to economic stimulus efforts. Knowing trade will not receive the same attention as under President Trump, US importers and some in the business community continue to press the Trump administration in its final days to lift tariffs or continue exclusions granted to companies from paying a 25% rate on Chinese imports.

The AMBA lobbied and succeeded in convincing President Trump in December 2019 to reinstate the 25% tariffs on Chinese plastic injection molds and recently filed formal comments on China’s World Trade Organization compliance. With only days left heading into the presidential transition, AMBA is working with outgoing Trump officials and briefing incoming Biden members on the impact of Chinese molds, tooling and dies on US supply chains, including those for medical devices, defense and automotive.

It is the regulatory space where we expect the most activity. Within days of taking office, President-elect Biden likely will seek to re-enter the Paris Climate Accord, reverse Trump’s Affordable Clean Energy rule, begin rewriting environmental review procedures of infrastructure projects and withdraw looser auto tailpipe regulations.

A divided Congress has few tools to stop an administration’s environmental actions, short of passing a bill the President-elect Biden would have to sign – reversing his own policies. Therefore, many battles wind up in the courts, where too often President Trump lost, even at the hands of his own judicial appointees. Of the 153 significant environmental regulations reviewed in the courts, litigation reversed or blocked 127, or 83%. We do not expect as many regulatory outcomes under a Biden-led EPA, as many of the senior officials already will have served in the Obama-Biden administration and are familiar with regulatory process.

Working with a broad coalition of manufacturers, many are lobbying to support the current Trump administration approach of customizing OSHA guidance for each sector to avoid a one-size-fits-all COVID-19 regulatory scheme. Our argument has been and will remain: A manufacturing establishment is different than the dry cleaner and the restaurant or retail store. Educating the incoming Biden team on how manufacturers and critical essential infrastructure businesses have protected their employees during COVID-19 could mean the difference between another shutdown and continued operations.

Due to the divided Washington, leading to gridlock, sources close to the Biden team anticipate obstacles to their agenda erected by Senate Majority Leader Mitch McConnell. Knowing few, if any, bills drafted by Democrats will pass the Republican-held Senate, President-elect Biden must look elsewhere. The team intends to move quickly with executive actions, regulations and other steps not subject to congressional oversight. The swift moves will at first focus on COVID-19 medical relief and then quickly address economic recovery.

This swift movement due to a divided Washington could mean more restrictions on US manufacturers or could open the door for new business through economic growth and federal government purchases. Often in Washington, perceived inaction masks work done behind the scene – work that regulators can complete with little public input. This includes trade, environmental and labor policy discussed here and identified by the Biden-Harris 2020 campaign as a priority.

Which brings us back to the original question: Is gridlock good for business, and does it even exist? We do not expect Washington to truly shut down – certainly not the regulators or responses to the coronavirus. It is true that Joe Biden is the first president since George W. Bush to enter his first term in office without full control of Congress, but what some will call obstruction others will call checks and balances. Some will label as Biden’s actions as attempted government overreach, but others will argue that during a global pandemic is when you need activist government most.

Yes, the voters have delivered a divided Washington to America, but complete gridlock is more a perception than reality. In my 20 years of lobbying across what will now become my fifth administration, I’ve learned government always can act if you know how to pull the levers. Across his five decades in Washington, if there is a lever to pull, Joe Biden will find it, and whether you win or lose may depend on how strong a voice you have in the nation’s capital.

Omar Nashashibi is a Founding Partner at The Franklin Partnership, LLC, a bipartisan government relations and lobbying firm retained by the American Mold Builders Association in Washington, D.C.