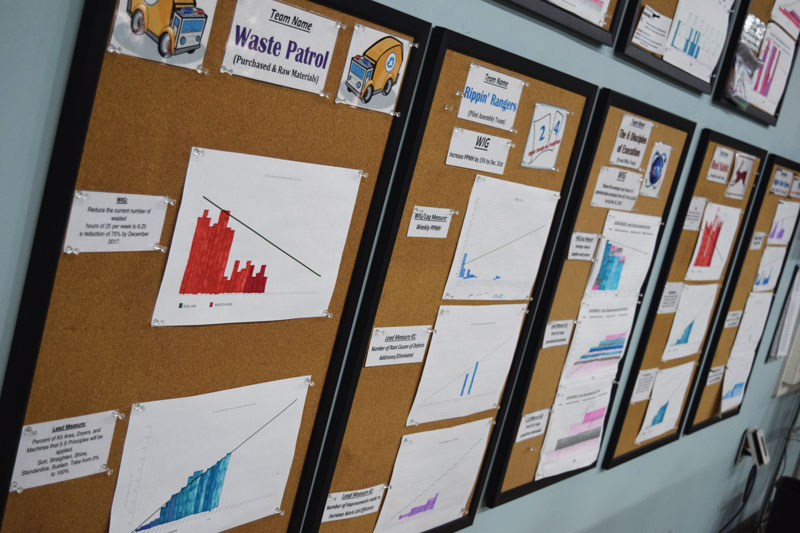 Every manager has done it: Look at the P&L sheets and analyze production. Consider customer comments and complaints. Prep for the meeting. Invite all the players to gather in one room. Review strengths, weaknesses, opportunities and threats. Brainstorm. Put ideas on the board. Stir the pot. Swap out this concept for that. Argue points until reasonable consensus is achieved, goals set and responsibilities assigned. Finally: a strategic plan with everyone on board.

Three months pass – or maybe just a month. What happened to the plan? Does anyone even remember the goals? One goal?

That bothered Lawrence Segrest, CEO of GreenLeaf Industries, a small plastic injection molding company in Lenoir City, Tennessee. “I’m one of those aggressive people who wants to do everything at once,” he said. “That was my history. Every year, I’d be looking at the annual plan, things we wanted to be better at, and would say, we’re going to get better at all these things. In the end we wouldn’t achieve much of anything. I had the vision but didn’t have the execution part.”

“I started looking for books on how to execute,” Segrest continued. “After reading the descriptions of some of the books available, the 4DX book stood out to me. It was simple. It really enforces alignment. Once we decided on a corporate goal – one or two – it emphasized how you need to focus on the ‘wildly important goals.’ So the teams’ goals are in alignment with the corporate goal. Everybody’s working on the same large team, heading in the same direction.”

The 4DX system being used at GreenLeaf is based on the book “The 4 Disciplines of Execution,” by Chris McChesney, Sean Covey and Jim Huling (FranklinCovey Co., FreePress 2012). The book outlines the four disciplines as:

“The fourth discipline, the Cadence of Accountability – where people make commitments and hold themselves and teammates accountable weekly – is the key,” Segrest explained. “I thought that even if the rest of this failed, that will be an incredible improvement to the culture. Everyone holds themselves accountable, so it’s not just the managers doing that.”

Before 4DX, Segrest said, there was difficulty remaining focused on implementing the annual plans. A second concern was that the leadership team – two or three people managing the family-owned company of about 45 – seemed to be forcing it. “Everyone was going through the motions without any real buy-in to the concepts,” he said. “We wanted to change the dynamic so that everyone was pulling the same direction.”

After deciding to implement 4DX, Segrest said, “We started out with the leadership team learning and practicing how to do brainstorming, set goals, look at lead measures and work with your team. When we hit our stride, the program starting really looking good.

“That was how we launched,” he continued. “It took us about six months to get going and 12 to 15 months to do it well. We had patience, and at this point I say it’s how we do business.”

Beth Johnson, GreenLeaf’s vice president of operations and quality systems, added that the company had used quality circles before starting the 4DX program, but the implementation lacked excitement as well as overall alignment and clarity about what was most important.

“In using quality circles, what teams decided to work on may or may not have a big impact on the bottom line,” Johnson explained. “It might be an improvement but not really impactful. In looking at the Four Disciplines of Execution, we determine what really is the most important thing. If it’s truly important to your organization, then why isn’t everyone in the organization working toward that particular goal? It’s common sense-driven.

“We took a step back,” she continued. “In the quality circle world, you want the team to pick its project because then the team members have ownership of it. In following the Four Disciplines, we did something different. The executives looked at what was impacting profitability: Where is the waste? By looking at that, we came up with the most important goals. Then the individual teams got together to pick their projects, but they had to be aligned with the corporate Wildly Important Goals. Now we have 10 teams working on programs that drive the corporate goals in the right direction. The bang for the buck is tremendous, plus everybody feels good with 10 teams working on the same problem. The impact on the bottom line and on morale is huge.”

Everyone in the company is on a team, and each of the 10 teams has a leader. Team leaders are given guidelines or boundaries as each team brainstorms to set its own goals and lead measures. Lead measures involve everyday activities that can be quantified and evaluated regularly in terms of progress toward the goal. These measurements go on each team’s section of a board that measures progress toward the end goal. A date is set to kick off the next 4DX goal and everyone goes to work. Each team meets weekly for 15 minutes near the scoreboard to evaluate progress and set commitments for the upcoming week.

Johnson said the system has benefited employees – including some with lower levels of experience or education – in allowing them to learn to identify waste. “They are trying to figure out where there is waste in the system: ‘Can we do this better? Faster? Can we move the racks closer to where we are so we don’t have to take so many steps? Why do we wait to put this part together at this point, because if we make a mistake it takes us three times longer to fix? How can we be sure we don’t make that mistake at all?’

“We’re seeing a shift in how people do things,” she continued. “Before, sometimes people would throw waste in the trash can because they didn’t want to have to count it. Now we have a tremendous amount of accountability and teamwork: Every pellet, every purge gets measured for waste. Instead of hiding the mess, they discuss it at their 4DX meeting. They can bring up their problems, ask for help in eliminating a problem and improve their efficiency. There’s a lot of discussion, and the conversations have changed to ways to make the job better and improve overall productivity.”

To really celebrate accomplishments through 4DX, Johnson said, the company wanted to do something creative. The teams report weekly, as outlined in the 4DX program, but management decided to tie a portion of the dollars saved in the program back to the factory.

Once a month, Johnson said, all employees gather at the “4DX wall,” where each of the projects is outlined. As the money is saved, after a drum roll, someone climbs a ladder with a pitcher of plastic pellets and pours them into a giant thermometer-like tube on the wall to represent the company’s progress toward the next goal. Though it’s not really a part of the 4DX program, the gathering helps create excitement.

“Sometimes we might have T-shirts, or a barbecue or ice cream social as small prizes,” Johnson said. “We alternate that with things for the factory. For example, we might have our mold-tech team use a portion of the budget to pick their own reward to allow them to do their jobs better. They might pick an electric pallet jack or a quick-release mold clamp or a marble-top table to measure product – all things that are improvements to the factory, but they get to decide what it is they need to help them do their jobs better. It has really created a lot of excitement.

“This is our third program,” Johnson continued, “and employees have earned a new break room with a television on the wall and an outdoor picnic area. This time we shared a financial benefit: Every single employee in the factory got a $1 raise. The big prize for the current goal is an extra vacation day or the equivalent benefit dollars for those who don’t like to be off work.

“It’s pretty exciting when you think about it,” she said. “We are trying to break down the ‘entitlement’ mentality that is plaguing corporate America now. Everything that (the employees) get, they earn. They see that it’s not just that the GreenLeaf executives have all this money: They all have helped save that money, and it can be used to make their jobs better, improve the factory or do something fun together as an organization. We didn’t just give them a break room or a pay raise: They earned it. There’s a tremendous amount of pride and self-worth that comes along with that, so we are totally sold on it.”

Before 4DX, Segrest said he would have tried to tackle everything at once. Now, once a goal line is achieved, planning begins for the next one. The first three programs were waste-related, but the leadership team is open to determining the next major goal: quality, customer service or something else. Then the team looks at ways to measure improvements, evaluates how much can be saved and sets goal lines.

“We try to put ourselves in our employees’ shoes,” Segrest continued. “Maybe this is their first job ever in manufacturing, so what can they come up with to achieve the goal? Can they be successful?”

The sales and marketing team has joined 4DX by looking at ways to do a better job with quotes and service to current and potential customers. The program also has been expanded to include the front office team, whose members look at the methods of dealing with customers, processing orders, interviewing and selecting job seekers and onboarding new employees. An unexpected benefit has been a higher level of engagement between the front office and the factory, Johnson said. “We’re all thinking about waste in different ways. It’s been really good for the entire organization.”

In terms of “lessons learned” from implementing 4DX, Segrest said the first improvement made was holding leadership accountable. “We started having weekly meetings with team scorecards where team leaders could measure themselves in 10 categories, with an ultimate score of 100. The leaders put that information into a spreadsheet to show how well we were doing in leading the company and leading our teams. That’s actually one of our lead measures. If the leaders are leading the teams well, we’re going to hit our goals.”

In addition, Segrest continued, corporate goals weren’t on the board in the beginning because a celebration of profitability might send a negative message to visiting customers. After recognizing that the missing corporate goal was a big weakness, they changed the measurement from profitability to waste reduction – which, Segrest said, ultimately represented the same thing.

A third improvement to the GreenLeaf program was to assign an employee to shepherd and maintain the 4DX teams. Her assignment includes looking at scoreboards to determine when teams might need assistance, conducting leadership team meetings and visiting with the teams to ensure they are on track. Segrest believes making that investment sends an important message. “It demonstrates our commitment to the program and reinforces the ability to achieve the goals being set.”

Johnson said she would recommend that companies employing 4DX work to improve the quality of the weekly commitments sooner rather than later. “Every week, you come to the meeting with a commitment already determined. At first, we were just happy they were making commitments because we wanted them to learn to do it – and that was a great starting point – but we probably didn’t move into enforcing quality commitments soon enough. Now everyone is held accountable.”

Today at GreenLeaf, Segrest said, execution is no longer a concern. “When I do my quarterly or annual reporting, it’s all tied back to 4DX and how that’s impacted our bottom line or our waste reduction program or the latest goal. We talk about it a lot, and everyone in the company participates.”