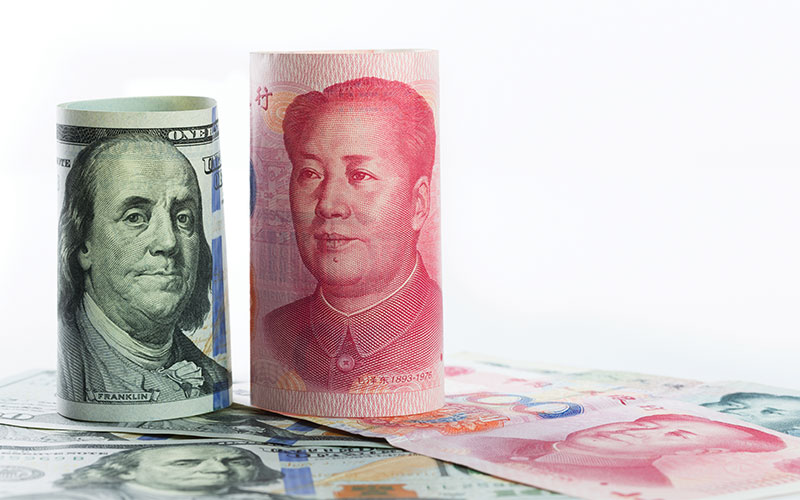 In December 2019, just as the coronavirus had begun to emerge in China, Beijing negotiators asked their counterparts in Washington to include a force majeure provision in the US-China Phase I agreement that President Trump went on to sign in January 2020.

The language – “in the event that a natural disaster or other unforeseeable event” – allowing either party to exit the agreement is not only about what did China know and when did they know it? It also has implications for trade and the agreement President Trump signed, committing China to purchase $200 billion of US goods and services over the next two years, including $77 billion from US manufacturers. Will China live up to its part of the deal or use this provision as a reason to back out?

April 14, 2020, marked the two-month anniversary of the entry into force of the US-China Phase I trade deal, and recent Chinese trade data shows imports into China for the first quarter of this year fell by 2.9% over 2019. Even once Chinese demand picks up, US exporters will face challenges shipping the amount of goods specified in the agreement as parts of the US begin to reopen.

The two sides set timelines for milestones on subjects from the easing of agricultural restrictions to purchasing schedules. However, China missed the March 27 deadline to provide a detailed action plan on its intellectual property commitments, and Beijing has not taken steps in addressing forced technology transfer or enforcing a crackdown on IP theft. Some of the challenges China faces are that many of the needed reforms require legislative or regulatory changes at a time when limitations on government officials congregating remain in place.

China has taken some steps to increase purchases of American goods, largely by excluding some US products from tariffs the government imposed in retaliation to President Trump’s 301 tariffs on Chinese imports.

These steps clearly are not enough for President Trump, who in April expressed his frustration and threatened to, himself, back out of the deal. The political climate in the US also may decide the fate of the Phase I agreement as much as COVID-19. The Trump 2020 campaign recently created a video criticizing former Vice President Biden for being too soft on China, while the president began publicly placing the blame on Beijing for not acting sooner on COVID-19.

Sources in Washington indicate that the White House is exploring ways to incentivize manufacturers to reshore business from China to the US. On behalf of the American Mold Builders Association, we are working with the White House and Congress on how to develop policies that strengthen manufacturing in America. AMBA submitted a list of ten recommendations to the policymakers drafting the CARES Act, securing eight – including several tax provisions.

The government is limited in the type of preferential treatment it may give US manufacturers for fear of violating domestic and international subsidy rules. For example, Washington State provided aerospace giant Boeing with more than $1 billion in tax credits in recent years, leading to a trade war with the European Union.

One proposal under consideration is a 100% expensing for companies that bring back to the US the manufacture of PPE, drugs or other critical infrastructure from China. Another topic of discussion is lowering the corporate tax rate for certain manufacturers; however, again, this raises concern over illegal subsidies targeting specific industries.

Regardless of the approach, the AMBA strongly supports the goal of bringing the supply chains for critical infrastructure back to the US. We have been in contact with the White House about different ways to promote the US supply chain and connect American businesses with medical device manufacturers.

The president has, as of this writing, signed into law four major bills to address COVID-19. The first, known as Phase 1, provided funding for testing and vaccines, and the second, the Families First Coronavirus Relief Act, expanded Paid Sick Leave and the Family Medical Leave Act. Phase 3, the CARES Act, served as the first economic stabilization measure that created the $349 billion Paycheck Protection Program Loan (PPP), which subsequently ran out of funds in just 13 days.

In April, Congress had to pass another stabilization bill with $310 billion for the PPP, which they knew – even as they voted on the measure – would not last more than a few days. In the first PPP tranche, 108,000 manufacturers received more than $40 billion of loans designed to help businesses keep employees on the payroll. The overwhelming demand indicates small businesses across the country continue to struggle under COVID-19.

Members of the US House and Senate likely will move yet another COVID-19 bill, already having allocated $3 trillion in new spending over a 60-day period. The question remains whether the economy needs another stabilization bill or is ready for an economic stimulus measure. Sources indicate lawmakers likely will pass the next COVID-19 legislation by Memorial Day, with many expecting the bill to lean more toward stabilization.

While the White House is eager to restart the economy with tax incentives to reshore manufacturing, it is unclear whether such provisions would make their way into the legislation now under discussion, which likely will include more support for individuals, and possibly small businesses. A senior House Democrat recently told us he expects not only a Phase 5 bill, but possibly a Phase 6 and Phase 7, even as he raised concern over costs.

The anti-China sentiment emerging as a potent component of the 2020 race for the White House may help to put pressure on lawmakers to include a provision related to onshoring more manufacturing to the US. Former Vice President Biden also is increasing his attacks on President Trump over his comments supportive of China in the early days of the pandemic.

Behind the scenes, the Office of the US Trade Representative continues to grant exclusions for US importers from paying the 25% tariffs on Chinese manufactured goods. The Trump administration recently granted the eleventh round of exclusion for 177 products under List 3, which imposes $200 billion of tariffs on Chinese imports. Much of the exclusions focused on products from fruit and vegetable seeds to industrial chemicals, rubber hoses and tires to automotive rear-view mirrors. These exclusions are valid through August 7, 2020.

The AMBA succeeded in lobbying the Trump administration in 2019 to reinstate the 25% tariffs on Chinese plastic injection molds that USTR had previously lifted for 12 months. This was an important victory for AMBA members, and the lobbying effort in Washington, DC, continues.

While much of Washington and the country focuses on COVID-19, the AMBA has kept its focus on making sure US importers do not convince the government to again lift the tariffs on plastic injection molds from China. Especially as the White House considers incentives to reshore manufacturing, AMBA is lobbying to make sure policymakers in the White House and on Capitol Hill understand the importance of mold builders in the US supply chain.

Having lobbied in Washington for more than 20 years across four separate presidents, we all too often see certain parties take advantage of a crisis and quietly take an action that could hurt US manufacturers. While we must all focus on battling COVID-19 and the immediate threats faced, the AMBA continues to work in Washington on policies to protect mold builders and grow manufacturing in America.

Omar Nashashibi is a founding partner at The Franklin Partnership, LLC, a bipartisan government relations and lobbying firm retained by the American Mold Builders Association in Washington, DC.