In November 2019, Laurie Harbour, president and CEO of Michigan-based manufacturing consulting firm Harbour Results, Inc., presented the results of the annual Automotive Tooling Forecast. In this article, we share some of the data from the report – but the whole story isn’t told by the data alone. 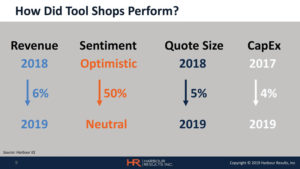 “The situation we’re seeing is the effect of a broader change in the automotive industry – it’s a shift in the traditional methods of making cars and the types of cars we make,” said Harbour. “We’re facing a new normal that includes economic uncertainty, government volatility, and the tariff and trade situation.”

As 2018 ended, the industry had started to slow down, according to the Tooling Forecast data. LMC data had forecasted the 2018 demand for tool spend at $9.7 billion, but it actually ended at $6.6 billion. This primarily can be attributed to large-scale programs that weren’t launched when expected, and tool shops felt the impact.

In addition, vehicle launch mix has changed. In 2017, 30% of launches for the Detroit 3 were all-new vehicles – when every tool on a car or truck changes, tool builders stay busy. But, in 2019, only 19% of those Detroit 3 launches were all-new vehicles. A similar trend was seen with Asian OEMS and the European 3 – fewer components are changing on the vehicles launched. New entrants into the market included all-electric product. Some of those tools were made in the North American market, but some were not.

As a result of the drop in demand, tool shop revenue was down 6% in 2018, and the total volume of quotes dropped 5% in a one-year period. Capacity utilization is at the lowest point seen over a 6-year period. At least 10 tool shops have closed their doors, and up to 2,000 employees have been laid off.

“This forecast is difficult for us to share,” said Harbour. “We are passionate about helping the North American manufacturing industry remain competitive. However, the ongoing marketplace change and competition from low-cost countries – specifically China – already have impacted tool and die makers.”

Are there opportunities for auto tool makers?

Also a good story for toolmakers: Nearly 100 more nameplates are expected over that same 10-year period, which means more complexity is entering the market at lower volumes. “The opportunities exist for those that have the ability to flex in the market to go after new business at competitive pricing,” said Harbour.

What is the impact on toolmakers in other markets?

“The biggest concern for toolmakers in other markets is those in automotive are trying to diversify, so they’ll invade other markets, such as power sports (Polaris), agriculture (John Deere), appliance (GE), etc.,” said Harbour. “The shops in other industries need to understand that these guys are hungry and will competitively bid to stay in business and land new, non-automotive work.”

What do AMBA members need to do right now?

“Tool suppliers don’t have a lot of time to readjust their business,” Harbour cautioned. “The change in industry workforce, in the marketplace driving the change in this automotive landscape – it’s happening right now.”

Harbour suggested that, as the tooling market contracts, “it is important that shops position themselves for the future. Tool shops must continue to put plans in place to shore up weaknesses, maximize technology and talent, and control costs.”

These plans include stress testing the business – performing a complete financial assessment with particular focus on the balance sheet. At the same time, work on operational efficiencies to drive throughput and plant improvements now, while things are slow. Harbour said now is the time to visit customers and hunt for work. “The key is flexibility,” she said. “Stress tests help companies understand where they stand, if they are in trouble and what plans they need to put in place.”