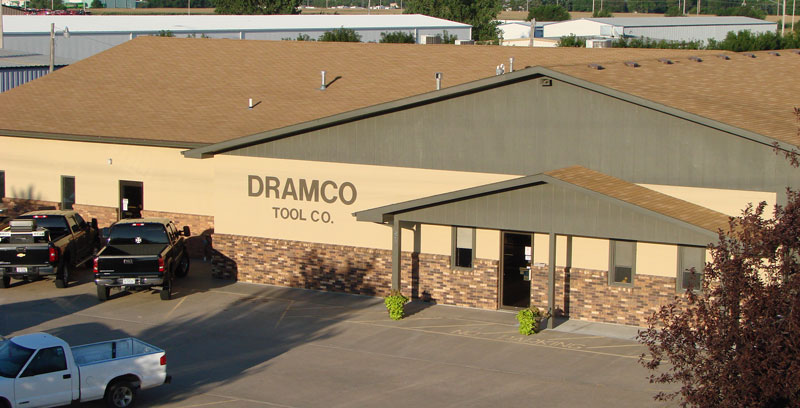 Grand Island, Nebraska, is a town of 50,000 located along Interstate 80, where semitrucks rattle by at the posted speed limit of 75 mph. Situated 150 miles from Omaha, Nebraska, and 400 miles from Denver, Colorado, more than 90 area manufacturing plants provide jobs for over 7,000 workers, according to the city’s website. Many of those employees come from the surrounding rural communities, adding much needed manpower to the labor pool.

In the heart of an industrial space in Grand Island, Dramco Tool Co. Inc. occupies a 37,000-square-foot, climate-controlled building. At first view, Dramco appears to be a typical manufacturing facility. Take a closer look, however, and Dramco is a business built on innovation. From its inception, it has operated with a unique business model that defines risk diversification. The company also leads the way in the state of Nebraska with its participation in an apprenticeship program and local technical education efforts. And, just ask Larry Patten, vice president and one of four company owners, about the projects their employees pull off for their customers in the aerospace, automotive and industrial markets. This is a small company doing big things in the Heartland.

Four business units under one roof

Dramco Tool Co. was founded in 1978 in downtown Grand Island. Two years later, a new 7,500-square-foot shop was built to accommodate a growing customer base and number of employees, and that same facility has been expanded by nearly 30,000 square feet over the past 48 years. Within the walls of Dramco, four separate manufacturing businesses operate, sharing space and work forces, while making joint business decisions about investments, personnel and operations.

“Dramco has always been diversified,” explained Patten. “The business was started by two guys, one who was a moldmaker and one who was a diemaker. We’ve just taken it a little further.” In the early 2000s, Dramco was sold to a group of existing employees – Bill Koch, Justin Pfenning, Todd Jacobson and Larry Patten – each of whom has been with Dramco for 20 to 30 years. Patten oversees the mold building operation, which encompasses 40 to 50 percent of the company’s overall sales; Koch and Pfenning work together on stamping die projects and automation; Jacobson heads the custom machining division; and Pfenning also takes point on the fabrication side of the business.

“It starts with a culture of trying to provide for the customer what they need and not locking yourself into a box,” said Patten. “When the customer says, ‘Hey, you made this die for us and now we need to automate it’, we don’t want to tell them we can’t. Instead, we try to find a way we can make it work.”

The automation unit began when one of Dramco’s customers needed help. The company’s diversification into the aerospace industry happened in the same way – a customer needed a carbon fiber part for a product, so instead of saying no, Dramco asked how to make it happen. “It’s a little different from the mentality of a lot of mold shops where they simply will not quote anything that’s outside of their core business,” Patten said. “But, since we have four core businesses, we can quote more than others can, and we’re not afraid of it.”

Each of the partners handles his own customer base, with very little overlap among the business units. The owners work together when it comes to capital purchases and deciding where the focus of the business should be at any one time. “It allows us to flex between the different aspects of the business – not only our workforce, but machine time, too,” said Patten. “It just takes communication to figure out when the big surges of work are coming through so we can schedule properly.”

Dramco has 50 employees, with a core group of 12 employees dedicated to mold building. In 2017, the company reached $10 million in sales for the first time and, as of March 2018, had just gone through the busiest 12-month period in the shop’s history. Two shifts operate, with the second shift consisting of four to five employees who keep machines going through the night.

The moldmaking business builds injection molds and carbon fiber tooling, primarily for automotive and aerospace applications. Carbon fiber tooling is a specialized knowledge base, and Dramco’s toehold in the market has grown as engineers with whom Dramco has worked have moved from one company to another. Dramco also has expertise in two-shot molding, which it employs for automotive customers.

The stamping die business is focused on exhaust systems for the automotive and large equipment industries, specifically in agriculture and construction. Automation projects can be done for any of the company’s customers, depending on needs. Production machining and fabrication round out the business units.

“We consciously started the fabrication business unit at the beginning of 2017 as another way to diversify,” said Patten. “The mold and die industry is very input intensive, with high costs in machinery and labor. We wanted to expand into an area that not only would give us a little more spread across the metalworking industry as a whole, but that also had a lower labor cost.”

After a year of operation, the fabrication side of Dramco is approximately seven to 10 percent of the business’s sales, with four full-time employees plus a salesperson. Focused on short-run metal parts for agriculture, oil fields and automotive, it provides a consistent income. “It brings a steady cash flow into our business, which is a definite plus because cash flow can be an issue for larger projects on the mold and die side and in machine building,” Patten explained.

Automation from concept to installation

Sometimes, a job comes through that has a little “wow” factor. Maybe it makes the engineers excited – gives them a chance to stretch their abilities. At Dramco, the “wow” factor is almost old hat.

Several years ago, Dramco began constructing automated manufacturing cells, creating machines for its customers from the concept stage to finish. Machine-build capabilities include hydraulic, pneumatic and electrical circuit design; PLC programming; design and installation of light curtains, safety relays and hard guarding; and delivery, setup and training. Automation projects range from the small transfer press Dramco is building now to a multi-station molding cell that utilizes ovens, presses and storage, all handled by one central robot. “We were approached by one customer with a need that we thought we could fill,” said Patten. “It’s grown from there.”

Custom machine builds begin with a conversation with the customer to find out what needs to be accomplished to meet the end goal of the automation. “Then we look at the resources needed,” said Patten. “Can we design it in-house? Do we have the knowledge base? As the automation gets more complicated, most of our programming on the larger automation projects is outsourced to another Nebraska company.”

Four employees are dedicated to the automation business unit, with three to four projects in some stage of design or construction at any one time. A large space in the Dramco facility is dedicated to machine builds, since the projects can be complex, with multiple stations, conveyors and robotics.

Patten has a video of an impressive recent project, and it’s easy to hear the pride – and excitement – in his voice when he talks about it. Much of the work Dramco performs generates that same energy, thanks in some part to the markets the company serves. “We don’t necessarily look for fun projects to take on, but there’s enough work coming across the board that we can concentrate on the things that interest us,” he said. “We have a lot of opportunities, and we enjoy what we do – and, it’s a whole lot more fun to build a part for the F-22 Raptor fighter jet than it is to build a part for a lawn mower.”

“The apprenticeship program still is in its infancy,” said Patten. “The state of Nebraska approached us because of our conscious efforts over the last decade, if not more, to partner with the high schools and with the technical schools in the area, specifically Central Community College of Hastings and Career Pathways Institute in Grand Island.”

CPI gives high school students the opportunity to enter a career field or gain a head start on college upon completion of high school. It also helps provide area businesses with a well-trained workforce in the areas of construction, engineering, information technology, health sciences, manufacturing and more.

The school has what Patten describes as a “very modern machine shop,” equipped through a partnership with Haas and a company called Productivity Incorporated in Omaha. “CPI put together a machine shop that any mold builder would be happy to have,” he said. “Through that, CPI is able to expose kids to industry in high school, when they typically wouldn’t get that opportunity until they started their first jobs.”

The program, at first struggling to find six or seven students, now regularly has 45 students enrolled – all of whom have jobs when they graduate. “CPI in Grand Island was the first of its kind in Nebraska,” Patten explained, “but now there are four more high school programs like it in the state.”

Dramco collaborates with CPI, supporting the program financially through scholarships and direct donations. Dramco employees are available if help is needed with projects or machines, and members of the ownership team serve on CPI’s advisory boards. The shop also hires students part time to work in the summer. “We have tours coming through all the time from local high schools and the technical programs,” Patten said. “When we hire a kid, he usually has been through our shop two or three times, and he typically knows a few kids who work here, which is a small-town Nebraska thing. There’s a little network that pops up around your involvement in potential employees’ education.”

The apprenticeship program that is taking shape through the state of Nebraska is a natural outreach of the work Dramco already has been doing. It will consist of an application and interview process, after which students will spend the summer between their junior and senior years of high school in full-time, paid apprenticeships. In attendance at the press event announcing the program were the mayor of Grand Island, Nebraska’s lieutenant governor, the commissioner of the Nebraska Department of Labor and officials from local public schools.

“There’s been a concerted effort in Nebraska that I think has gone under the radar,” said Patten. “The director of NIMS has been out to see what we’re doing here, and he was impressed. It’s a real movement that’s working well to keep potential employees in Nebraska and working for Nebraska companies.”

Dramco has played a significant part in that movement, and the mold building – and stamping die, custom machining, automation and fabrication – business in central Nebraska will continue its role as a quiet leader in the community and in the industry. Rapid change is a challenge in every manufacturing business today, but Dramco is ready – it’s a company with innovation at its heart.