The Original Equipment Suppliers Association (OESA) and Harbour Results, Inc. (HRI) recently completed their Automotive Tooling Barometer, containing data from Q2 2016. The survey reached a total of 65 respondents from North America: 69 percent from the US and 31 percent from Canada. Seventy-six percent of total respondents were mold builders with diversified revenue ranges, including shops with less than $5 million in revenue to more than $40 million.

After experiencing a very slow start to the year, the survey revealed that respondents from mold shops felt generally positive about the second half of the year, matching many industry forecasts that projected the third and fourth quarters of 2016 would be very busy times.

The industry experienced a decline in tooling utilization in the beginning of the year, with more than $2 billion in tooling capacity not leveraged; however, utilization rates stabilized in spring 2016. Mold shops faced their average lowest rates in the first quarter of 2016 (67 percent). Although the industry has not reach its highest capacity utilization rates since the downturn, the industry is currently stable, with mold shops predicted to maintain a 76 percent capacity rate or higher at the end of 2017.

Additionally, the industry has seen a significant decrease (6 percent) in overall work “on hold” from January to June, and that trend seems to have continued throughout the remainder of 2016. Harbour Results estimates the industry “on hold” impact in the second half of the year to be around $1.68 billion, a decrease from more than $2 billion in January. Not only has overall work “on hold” decreased, but the number of those shops that previously had more than 10 percent of work “on hold” also has decreased by 9 percent.

The Barometer also looked at toolmakers’ sentiment – what is each toolmaker’s business outlook for the next three months. There appears to be a cyclical nature to the tooling sentiment index, with some level of correlation to the amount of work “on hold” reported in this survey. Overall sentiment has increased to 74, up 8 points since January’s study. What’s more interesting is that year over year, since August 2014, tooling sentiment has increased from 56, a 32 percent change.

This Barometer study also focused in closely on mold marketing and sales practices, which uncovered a number of interesting facts. Since 2015, surveyed tool shops are quoting more and are expected to reach $9.3 billion in overall quote activity this year, compared to the $8.9 billion (2015) and $8.6 billion (2014). Mold shops’ quotes are forecasted to remain relatively consistent throughout the years.

Although tool shops are quoting more, their revenue is projected to remain flat overall, compared to 2015. While the stagnant revenue can be a result from the slow start to the year, the survey also revealed a decrease in revenue per tool, specifically for die shops. Since 2014, mold shops experienced a 4 percent increase in revenue per tool, from $194 to $209 per tool. When looking at North American revenue per tool, Canadian shops are having greater success, as they are experiencing higher average tool prices than their US peers. A decrease in tool price counteracts the increase in quoting and causes revenue to remain flat.

It is hard to speculate too far, but HRI expects to see an increase in average tool shop revenue for 2017. 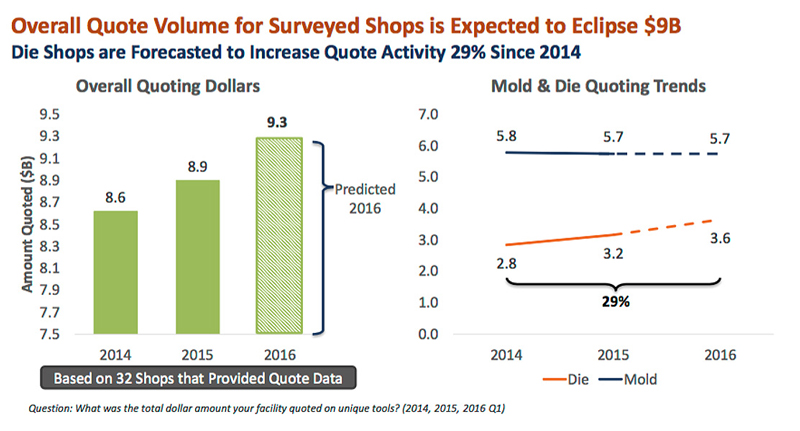 Not only do larger shops have greater visibility of future sales, but they also have a significant advantage of having fewer customers, in terms of earning more revenue. Shops with revenue between $20 and $40 million tend to have the largest number of customers (40) and earn, on average, $1.5 million per customer. However, shops with more than $40 million in revenue have, on average, 30 customers (which is the same number as shops $10 to $20 million), but earn $2.4 million per customer – a 56 percent increase in revenue per customer compared to other shops.

An incredibly sluggish start to the year put a majority of tool shops into very tough situations. However, work “on hold” has decreased considerably, and the number of tooling packages released and tools per package are steadily increasing. While sales and quoting levels have shown an overall increase, they vary greatly by revenue range. Specifically, larger shops are more efficient, have more future sales booked and earn more revenue per salesperson.

Predictions for 2017 show limited manufacturing growth. Factors impacting this include the strong US dollar, which limits the country’s ability to export manufactured goods in some industries. Also, the decline in the oil and gas industry has impacted the entire supply chain, including the mold shops that supply to the machining companies. Finally, weak capital spending – specifically in production capabilities – will limit the growth among manufacturers.

However, the news is not all bad. Consumer spending will continue to be strong, and certain industries, such as automotive, are continuing to develop and launch new vehicles. Based on LMC Automotive forecasts, Harbour Results expects the industry in 2017 to source tooling to support 70 new vehicle launches. 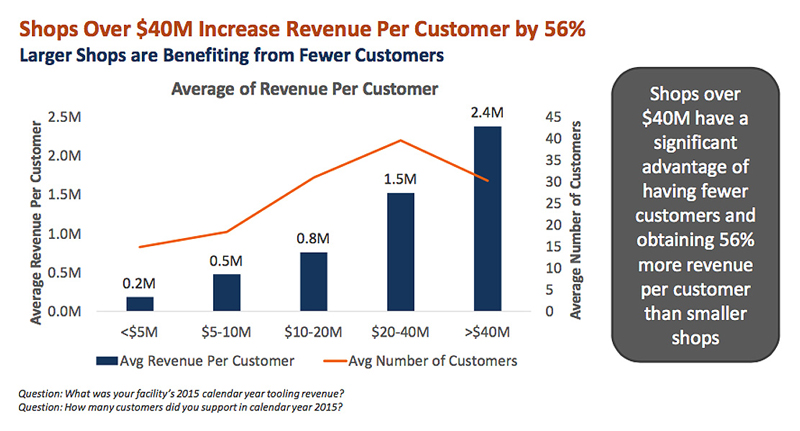 Developing a sales process is one avenue to help companies balance out the peaks and valleys that are part of this cyclical industry. Regardless of shop size or area of expertise, a sound sales process will help ensure business is coming through the door. The first step in developing this process is to look at data – hit rate, project margin, profitability by customer – and understand what’s working and what is not. From there, work on identifying target markets, a pricing and quoting strategy, and specific customer sales plans. Another critical aspect of building an effective sales process is feedback. This will help determine if the plan is working or needs adjustments.

As the industry recovers from a slow start and experiences a busy second half of 2016, mold shops must keep sight of what’s to come, as predications show limited manufacturing growth in 2017. Now, more than ever, mold manufacturers must work “on the business.”

Leadership must review both internal and external data and create a strategic plan that aligns the business and operational activities to optimize shop performance. Companies that ensure their production floors have the flexibility to scale up and shrink with the market will be most successful.