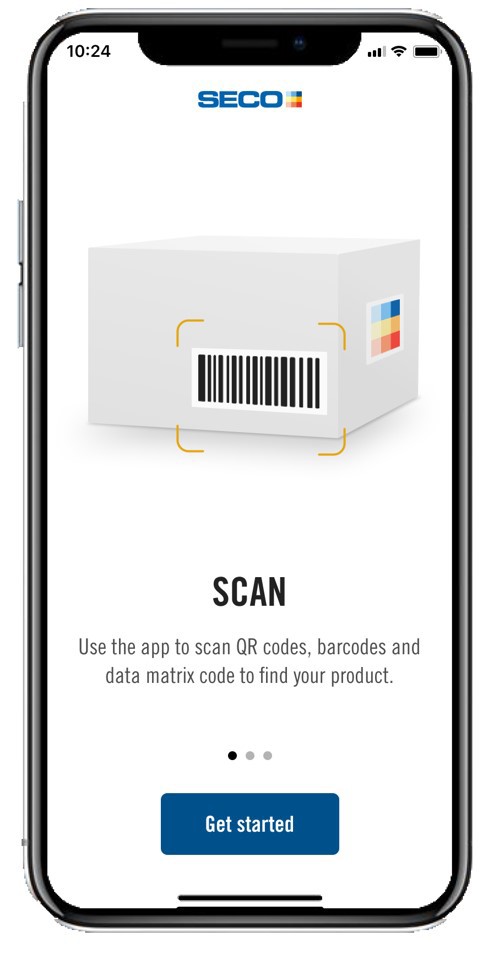 With its origins in Fagersta, Sweden, Seco Tools is a provider of metal cutting solutions for indexable milling, solid milling, turning, holemaking, threading and tooling systems. When Jan Gravningsbråten came up with an idea for how to reduce waste in the tool production process, little did he realize the potential effect it could have on the Seco business. Several years later, his idea is able to track ten billion tools that in turn can generate a huge amount of insight into how Seco’s products are used.

Back in 2018 Gravningsbråten, who is an R&D technician in the Innovation Lab in Fagersta, Sweden, noticed that when faults occurred in the production process, it was impossible to identify the individual tools that were affected as each tool was only identifiable by a batch number. Gravningsbråten stated that one could have 10,000 or 20,000 in a batch and it was impossible to work out which ones might have been affected by a production fault, so the technicians would have to start all over again. That is not really economically viable.

Individually Identifiable
The challenge was to find a way to make each tool individually identifiable, and that’s when the lightbulb went on for him – data matrix codes, which are similar to QR (quick response) codes. Gravningsbråten explained that Seco has chosen a series of ten billion numbers for its codes, and can fully trace each tool marked with them using software where the company collects all the codes from the machines that produce the tools.

Originally invented in 1987, data matrix codes are two-dimensional codes often used to track objects in industrial processes. The codes are put on each Turbo 16 tool, one of the most popular tools in the Seco Tools range, using a laser-printing process. Putting data matrix codes on each tool deployed out in the field will in the future allow both customers and Seco Tools to track it through its working life.

The codes also are compatible with the Seco Assistant, an app which contains a wealth of useful information for clients and that allows them to make calculations and scan their tools directly to find out more about them. Micael Baudin, specialist in digitalization at Seco Tools, stated that, ideally, clients would input data about how they use the tool into the system – what machine they use, when it is installed, how long it is used for and for what purpose. Scanning the codes on the tool would then bring up all that data, which basically is the life story of the tool.

Laser-Printed Codes
Together with Gravningsbråten and a small team, they found a way to use lasers to print the codes on tools. Gravningsbråten stated that the vision is to be able to support the customer if there is a problem using the tool in certain ways – Seco can see what it has been used for in the past and based on that it can try to find a solution to their issue, no matter where they are in the world.

Data collected from these tools can then be fed back into the R&D process, improving the next generation of products. Gravningsbråten said that if the data matrix codes are still readable they can be used to sort products that are returned to Seco, which makes the process of recycling much easier. The company will be able to sort the different metal compounds quickly so that it can re-use as much of them as possible, which is a real plus when it comes to its sustainability work.

Baudin stated that, so far, Seco has used the idea with one product, and it is ironing out the teething problems, but ideally it would like to see a situation where customers agree when buying products from the company that they will return them to it at the end of their useful lives. When they do so, the company can scan these codes and see what has happened to them in their lifetime.

For Gravningsbråten, the biggest benefit is to be found in the sustainability aspect of the project. He stated that if one imagines that Seco could say to a customer that they had to send the tools back to the company when they were finished with them – there might even be a situation in the future where they are not allowed to simply dump old tools and that they are required to recycle them. There are a lot of benefits, being able to help customers immediately, but automizing the recycling process and being able to sort different metals and coatings using this data matrix could quickly change things for the better.

Digital Solutions
The use of the data matrix codes has huge potential in terms of transforming how Seco Tools does business.

Thomas Norström, senior R&D manager, stated that he sees many opportunities based on this technology for future digital solutions, solving pain points and increasing productivity, both in Seco Tools as well as at its customers. To make the company’s products smarter by connecting information to each individual item throughout the whole product life cycle will make a difference – Seco’s smart products will be able to answer questions like who are you, where do you come from, how should I use you and how have you been used.

The use cases on the data matrix technology will be part of a bigger initiative called Seco Beyond Hardware, and Norström will step out of his present role as senior R&D manager and step into a role as program manager for Seco Beyond Hardware. He stated that he is really excited about this. To be able to follow and support all these exciting solutions all the way, from ideas to products implemented internally or at the company’s end customers, will be very enjoyable.